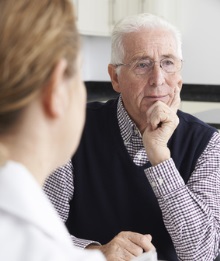 The results of a recent study indicate that older men using AndroGel could face an increased risk of prostate problems.  If the results of this study are accurate, then men who are over the age of 60 and using AndroGel may need to take heed.  AndroGel is an extremely popular testosterone medication that is used in testosterone replacement therapy, or TRT.  If using testosterone medication does increase the chance that older men will suffer from prostate problems, it will only add to the list of alleged AndroGel side effects.  Some are already calling for additional research into this potential issue.

The study was done by researchers from AbbVie, Inc. and Harvard.  It was published in the most recent edition of the Journal of Sexual Medicine.  A link to an abstract for the study can be found here.  AbbVie, Inc. is the manufacturer of AndroGel, and the company is a subsidiary of Abbott Laboratories, a true giant in the world of pharmaceutical medications.  The study was done with a cross-section of male subjects and it was double-blind in nature.  The mean age of the men involved in the study was 53.5.

The men involved with the study were 274 in number, and each of them had low testosterone levels due to a condition known as hypogonadism.  The men were studied for a total of six months.  During that time, 234 of the subjects were given AndroGel and the other 40 were given a placebo.  The findings in the study were as follows:

What Are PSA Levels?

PSAs are prostate-specific antigens.  PSAs are basically enzymes that exist in the male body and have to do with the semen.  Generally speaking, no definitive link has been established between heightened levels of PSAs and the development of prostate cancer.  However, some studies have shown that an increase in the levels of PSAs can lead to a greater risk of prostate cancer and other prostate-related problems.

If it turns out that using AndroGel does in fact lead to a heightened risk of prostate problems, such a result would increase the number of alleged AndroGel side effects.  Already at this point, the most commonly alleged AndroGel side effects include increased risks for heart attacks and strokes.  If you or someone you love has undergone TRT and you’ve suffered any health problems as a result, contact the testosterone side effects lawyers at Parilman & Associates as soon as possible.  You can either email the firm or call 800-800-DRUG.